More questions than answers: Race and response in New Orleans

Posted on February 28, 2011 by armikaipainen

Calgary Serves programs provide students with opportunities to explore issues in our world today through volunteer work. Lectures, community visits and group discussions prepare students to develop a more complex understanding of the issues; in cases such as the program in New Orleans, students came away with more questions than they started with.

Students with the home owner (middle)

The Calgary Serves group worked with the St. Bernard Project, a non-profit organization that focuses on rebuilding homes impacted by the destruction and flooding of Hurricane Katrina. Students spent the week doing ‘mold remediation’ in a home for Genevieve Ross, a woman who fled before the storm, but who moved around between states in the years following Katrina. After her husband died last year, she decided to try to move back to her family’s home in St. Bernard Parish. Once the mold remediation is complete (a tedious, multi-step process to ensure the safety of the home), the insulation and drywall will go in, the plumbing and electrical work will be done, and after five and a half years, Genevieve will finally go home.

Beyond their work on the construction site, students met with local experts to learn about the impact of the oil spill on the Gulf Region and learn more about the deteriorating wetlands around New Orleans. Students learned that the two disasters to impact New Orleans in the last five years are not divorced from one another; for instance, the Gulf Region’s deteriorating wetlands, often because of development and exploration for natural resources, make the region increasingly vulnerable to flooding. Wetlands in the region provide the first line of defence to storm surges, such as that that swept through various New Orleans communities in late August 2005. Every 3-4 miles of wetlands reduces the height of a storm surge by 1ft. Open water on the other hand, provides no protection whatsoever. 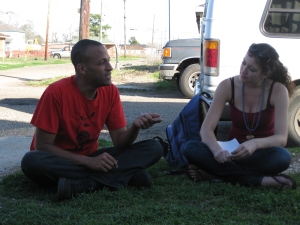 Nat Turner, Our School at Blair Grocery in the Lower 9th Ward

Students are challenged by a new revelation on their final day in New Orleans. They’ve spent the last 5 days in St. Bernard Parish in the communities of Arabi and Chalmette rebuilding a home for a black woman in Violet. St. Bernard Parish they know, was one of the worst affected areas in the 2005 storm. But on this day Nat Turner of Our School at Blair Grocery talks about racism in the Parish; unlike the Lower 9th Ward where Turner works with his urban farm and after school program for marginalized youth (mostly black), the Parish is mostly white and not only that, until recently, had regulations on who could buy property; these policies effectively kept many blacks from returning, and kept other blacks from buying land in the Parish. The biggest controversy relates to the public housing units that were closed and demolished after the storm. Most of the former residents in social housing were black. It’s difficult not to see this as an intentional practice to keep a particular population out and selectively decide who can move back and who cannot.

Entrepreneurs cut grass for those who haven't returned or rebuilt.

Other practices keep blacks from returning to the Lower 9th Ward, a traditionally poor, black, working-class community; families who are still yet to return (about 90% of the population) are taxed heavily for failing to cut their grass. Turner’s frank discussion about racism in Louisiana, particularly post-Katrina, pushes students to ask – why isn’t there a supermarket in the lower 9th? Do residents have access to medical care in their community? Why has the fire station in St. Bernard been rebuilt while the fire station in the Lower 9th consists of a trailer with a fire truck parked beside it? Will the former residents of the Lower 9th ever return? And if they don’t what will become of the community in five years or ten years? Will this traditionally black community be rebuilt and gentrified with condos for middle-class, white New Orleanians? Is that what it will take to bring back the supermarkets and city services?